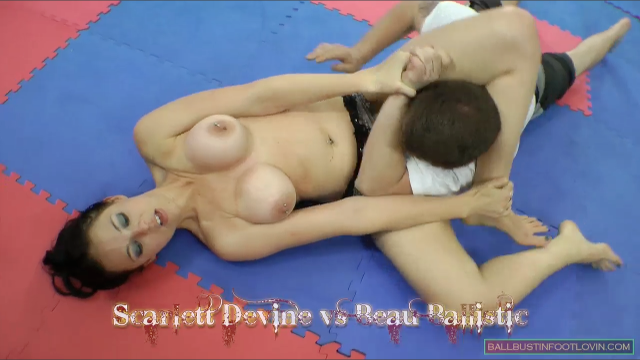 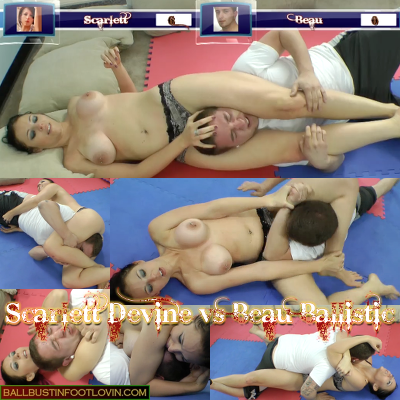 Amazon Goddess Scarlett Devine goes topless in this competitive mixed wrestling match against the little Beau Ballistic who try as he might, is just over powered by Scarlett’s sheer force, stature and skill…. in all ways this little guy is out classed by this Tall Goddess!

…And to add insult to injury, Scarlett takes her big tits and smothers Beau into even further submission!

This was another custom request and the gentleman who ordered this custom had the following to say about this video:

“Scarlett Devine vs Beau ballistic in a competitive match. But in truth it can only be loosely called competitive, because in the match previous to this one, Jolene the Valkyrie and Scarlett totally took Beau apart, to the point where this competitive match became a domination beat down. Scarlett barely broke a sweat in the match beforehand, while Beau spent his time being turned into a sweating, helpless wreck by the two beauties. So when this match starts Beau is already exhausted and faces a fully powered Scarlett who easily annihilates him. Scarlett rarely does filming these days and even more rarely does competitive mixed wrestling, but in this one she shows why she is so extremely dangerous. Scarlett isn’t aggressive to start off with, but rather lets her male opponent throw all he has at her so she can gauge the extent of his strength before launching a devastating counter-attack with her amazon form. Beau is relentlessly scissored, choked, and smothered by this beautiful amazon, who early in the match loses her top while continuing to revel in the destruction of a vigorous, but overpowered male opponent. An unforgettable performance by Scarlett!”