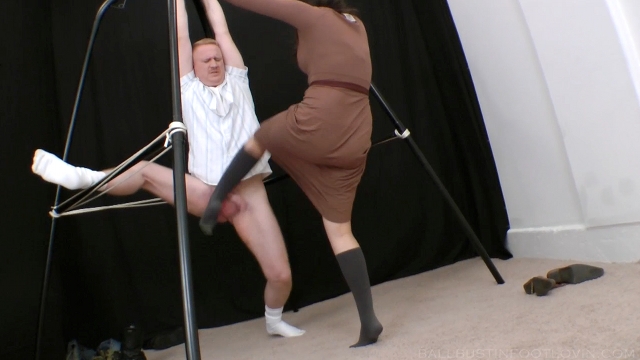 Mistress has just purchased a used pair of western cowgirl boots and wants to further break them in so that they have an even more worn look about them as she thinks western style boots should have a rustic worn look about them. Fortunately for mistress she has a willing sub that is just “hanging” around and perfect for breaking in boots.

Mistress starts out kicking the sub in his balls with his pants on to begin the breaking in process. After awhile of this Mistress gets tired of the denim and wants a more intimate expression of kicking her sub in the nuts, so she has him strip down to his boxers and then further to nothing but naked vulnerable nuts.

Mistress satisfied with her worn boots decides to go sock style on the subs balls, delivering even harder blows until at the end she makes her ball bitch raise his right leg up onto the support bar which opens his legs so wide his balls are super vulnerable…… at which point Mistress delivers two devastating kicks sending the sub into convulsions, then passing out from the pain and hanging by his bound hands!