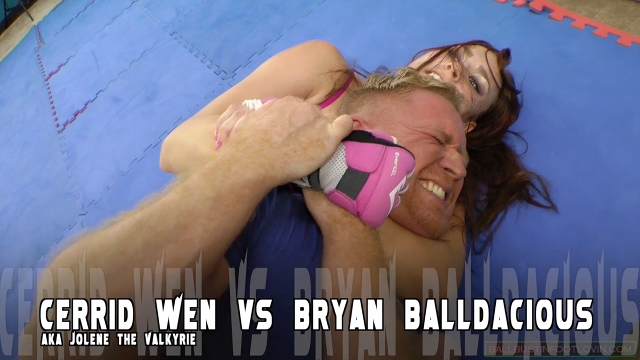 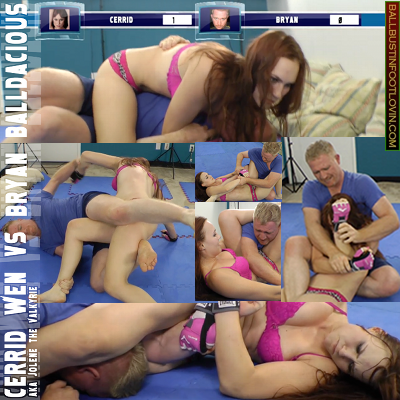 Yet another competitive match and more to come…. This time it’s Cerrid Wen (aka Jolene the Valkyrie) who goes after the tired and wore out Bryan Balldacious… this match pretty much turns into a complete slaughter! This was another custom request that we think will satisfy your need to see a drop gorgeous female lay waste to a male!

“Cerrid Wen made her wrestling debut not too long ago, and has been running through her flimsy female competition like a freight train. But how does she do in a 1VS1 match with a male with 100 pounds on her? She completely devastates him. To be fair, Bryan had wrestled 2 matches earlier, one of them being against Tyler and Cerrid together, and was wore out while Cerrid was bursting with strength and energy. A strength and energy that seemed to not diminish one bit as she Bryan with hold after hold, wringing submission after painful submission from his tired frame with a combination of Krav Manga and BJJ. Her leg scissors are her most devastating weapon, and simply being in her guard and her headlocks has Bryan ready to tap from the agony. Cerrid states multiple times that she enjoys making him suffer, despite his best efforts to fight back. Those of you who’ve followed Cerrid here and on other sites have never seen her like this, and will have a hard time reconciling that erotic, sensual redhead with the cruelty and utter dominance she displays here”.