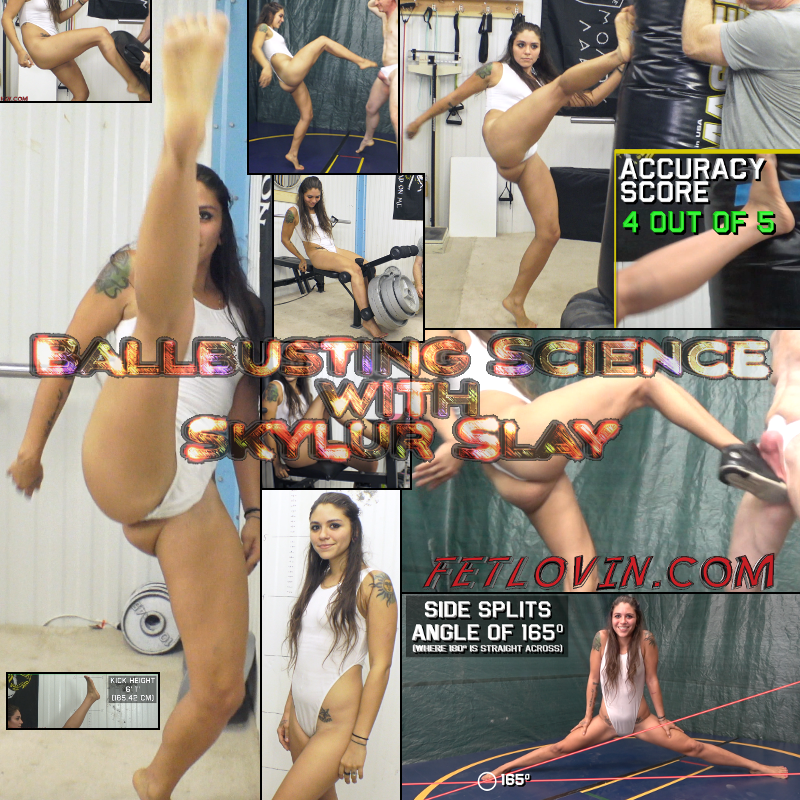 My fifth installment of “Ballbusting Science” where I attempt to measure the ability of a woman to really fuck up a pair of Testicles by kicking them as hard (and as accurately) as she can. I continue to refine and improve upon the measurements and methods to try and make a real “scientific” assessment on Ballbusting.

As in the last two installment, this fifth installment includes a kicking accuracy test, as well as how flexible the girls legs are by doing two types of splits and finally in addition to kicking barefoot, I’ve added kicking with shoes on, which makes a huge difference in the amount of power a girl is willing to put into her kicks as the shoes take away any concern of hurting her foot.

I understand that measuring such a thing as Ballbusting is fraught with complications and variables that are hard to repeat, but with that said I figure given the same measurements, the same activities and in most cases the same pair of balls, we should be able to draw some basic conclusions and come up with a rough idea as to what makes one woman a literal “Ball Buster” (as in has the ability to rupture your balls with a single full force kick) as to a woman who is more likely to just make your balls sore for a few days.

In this assessment we welcome Skylur Slay….

Skylur does a lot of leg strength exercises on a regular basis and she has a history of busting balls!

Her Ballbusting power (force) is very powerful in my opinion (I was astonished at the power this girl has in her legs!), I found her kicks to be chilling…. she has the ability to pop your balls with a single kick! Her Accuracy is good, as demonstrated in the accuracy test with 80% accuracy, during the nude ballbusting segment, she hit my balls every single time, favoring my left nut, but she did hit my right nut once, so she does have the skill to aim and strike her target! I must say I was a worried about receiving kicks from Skylur!

While testing her leg to see how much weight she could lift or push she maxed out the machines! This girl is STRONG!

It is my assessment that Skylur possess the ability to rupture a nut with one of her full force kicks. Skylur strikes me as a “Tomboy” type, eager to play rough, get dirt, horse around and in many cases the boys will find it hard to keep up with her! She is very enthusiastic, full of female energies, loves to play hard and will happily make your balls sore, swell them up, or pop both of them…. she’s a REAL BALLBUSTER!

I do have to say that Skylur was holding back during the nude ball kicking, I tried to get her to go full force, but she was worried that she would actually rupture my nuts (and in all honesty I think she could have). That said there was no acting or fake ball pain in this scene, it’s real reactions from me, Bryan Balldacious. That’s not to say here kicks were not hard (they were), but I know she was holding back. You can clearly see her full force kicks during the pad between my legs portion… no joke, her full force kicks are FUCKING DANGEROUS!

After we establish her measurements, kicking leg lifting weight max, kicking height, kicking accuracy, flexibility we do three phases of full force kicks: jeans, underwear, nude balls and with each phase we do barefoot and with shoes.