An Interview with Eva Notty 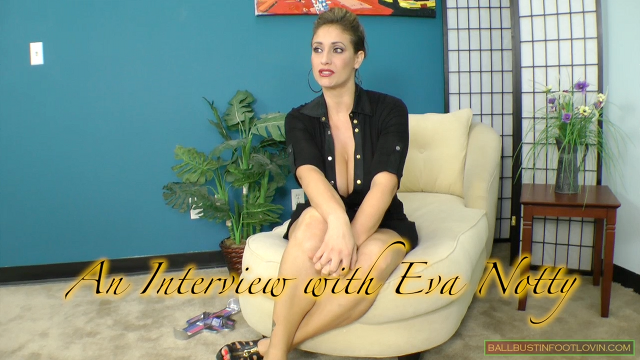 If you like our interviews, then without a doubt this is a Must Have! Hell even if you’re not the interview type, this interview will probably turn you into an interview fan! Yes it’s that good, and no we’re not saying that just to sell you a clip… Eva Notty as it turns out LOVES, JUST LOVES BALLS! She professes her love for balls over and over again in this interview… she even says that testicles make a man more attractive than his dick! And the bigger and low hanging the balls the better she says!

Eva tells us a story of a former friend who had such low hanging balls that when he would sit on the toilet, his balls would dip into the water and how much balls like that just drive her crazy!

She tells us that a guy with small balls deserves to be kicked more as she believes this will make his balls bigger and hang lower.

With all this talk about balls lets not loose sight of (how could you) her GIGANTIC TITS which come in at 34 J! The “J” stands for “JUST FUCK” as these have to be the biggest and most fuckable tits we have ever seen here at BBFL! Later into the interview we added a new segment which was suggested by a fan of our interviews…. “have the girls chooses from a selection of tools and decide which she would most want to use to destroy a mans balls and why”…… well Eva chooses her ball smashing tool and tells us why with a wink and a smile 🙂

This interview also sets a new time duration record for us… coming in at 33 minutes, it is packed full of so much it’s just way too much to describe here…. she has a very bizarre story about a time when her dad got into a bar fight where he cut off the other guys dick, which she now says she has in a jar on her mantle! INDEED!

Eva MIG welds, likes to work on old cars, builds dawg houses and loves to have one night stands! Wow, Eva sounds like some sort of perfect woman!

Trust us you have to watch this interview! You will not be disappointed!