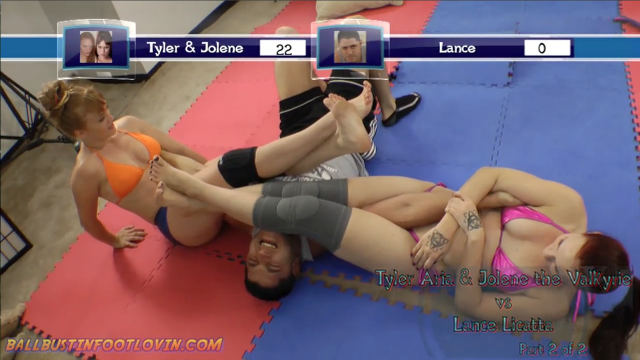 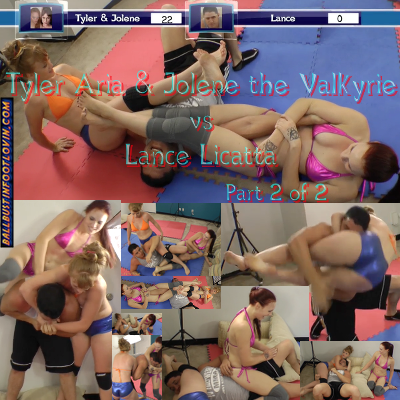 In this the second part of the Tyler Aria & Jolene the Valkyrie vs the MMA grappler Lance Licatta, the girls come back wearing a little less and ready to drain whatever fight Lance may have left in him. Lance does manage to score a couple submissions against the girls in this second half, but they make him pay for it!

Jolene is just crazy in this second half, she jumps on top of lance and falls off of him, hits the floor hard but just laughs like an insane crazy woman before going after Lance for another submission!

“In this super competitive match, Tyler Aria and Jolene the Valkyrie take on the very game Lance Licatta. Those of you who have watched Lance know that he is a real amateur MMA Grappler who is also hired to hold back and let the females rough him up. Well, this time he’s fighting back full throttle against the 2 sadistic red heads Tyler Aria and Jolene the Valkyrie, both of whom are well known for destroying male opponents that won’t fight back against them. Lance goes after both of them aggressively and while he may have been more than a match for them 1 vs 1, 2 vs1 even a fighter like Lance is taken apart piece by piece. Vicious leg scissors drain away his speed and vitality, add to that the slaps to the face, the punches to his balls and verbal humiliation by the 2 pretty girls destroying him only breaks him down further. The girls’ holds and locks are long, vicious and relentless, and “JOLAria”, as this two girl team is known, shows how even a skilled fighter can be reduced to helplessness when they release their fury.”