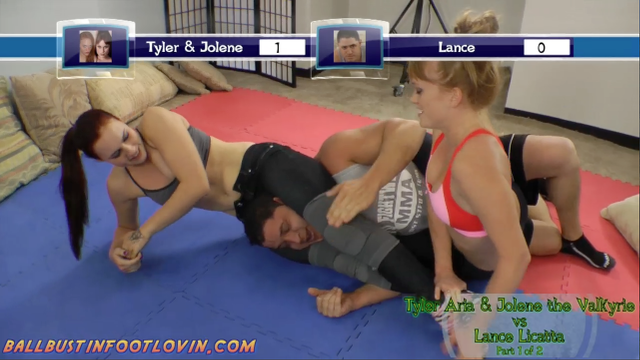 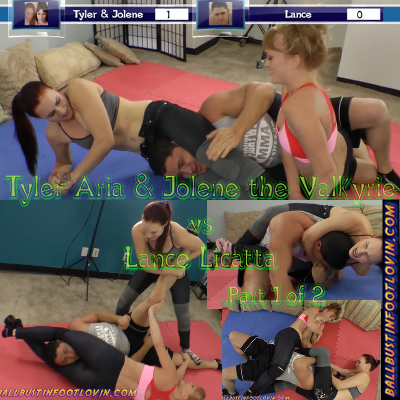 Tyler Aria and Jolene the Valkyrie are back and this time they have their work cut out for them as they have to take on the big MMA Grappler Lance Licatta!

The girls pull out all the stops against Lance when he starts to get the upper hand…. they find out real quick that he has super sensitive balls and work together to keep his legs apart so they can punch his balls! Hell these two vicious females even make the poor boy bleeed…. it seems to be a forgone conclusion that when these two get together they will make their male opponent bleeed! Vicious!!!

“In this super competitive match, Tyler Aria and Jolene the Valkyrie take on the very game Lance Licatta. Those of you who have watched Lance know that he is a real amateur MMA Grappler who is also hired to hold back and let the females rough him up. Well, this time he’s fighting back full throttle against the 2 sadistic red heads Tyler Aria and Jolene the Valkyrie, both of whom are well known for destroying male opponents that won’t fight back against them. Lance goes after both of them aggressively and while he may have been more than a match for them 1 vs 1, 2 vs1 even a fighter like Lance is taken apart piece by piece. Vicious leg scissors drain away his speed and vitality, add to that the slaps to the face, the punches to his balls and verbal humiliation by the 2 pretty girls destroying him only breaks him down further. The girls’ holds and locks are long, vicious and relentless, and “JOLAria”, as this two girl team is known, shows how even a skilled fighter can be reduced to helplessness when they release their fury.”