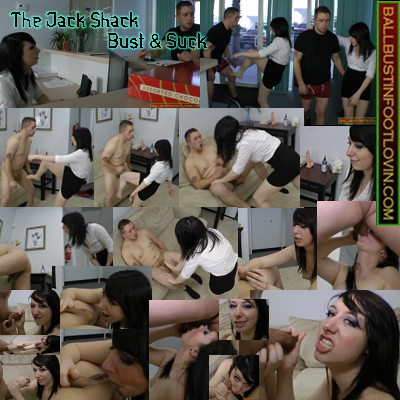 Beau is visiting his favorite establishment “The Jack Shack” and today he is bringing a box of chocolates to give to his favorite girl who always know how to suck him off just right. But when the secretary tells him he owes them $3,500 and that his credit card had declined, Beau tries to convince the secretary to let him slide today and pay later. The secretary however is not having any of it, and tells him he has to pay today!

After some haggling back and forth, the secretary comes up with a plan for Beau to pay off his tab. The secretary tells Beau for $100 of debt, she will deliver a blow to his balls…. so 35 blows to the balls and his tab will be paid off. Beau reluctantly agrees, thinking that she may be joking and that he might be able to talk her into to sucking him off.