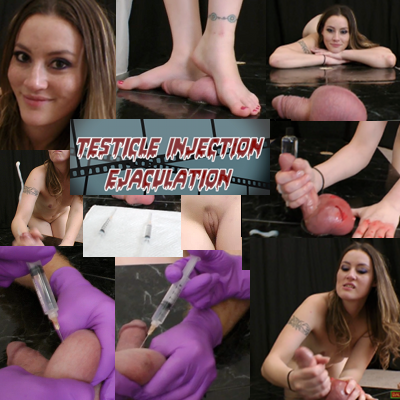 We defiantly crossed into uncharted Testicular territory with this clip!

After Jassie is satisfied his balls have swelled up enough from the stomping, she then begins the process of injecting saline into his balls to make them even bigger!

Jassie pulls out one syringe and stabs her slaves right testicle….. she slowly pushes the syringe plunger down and as she does, you can see the ball getting bigger! Once all the saline has been injected into his right testicle, her slave moans in pain as the pressure inside his right testicle is excruciating, he begs for her to jerk him off to relieve the pressure…. but this half Japanese girl is just getting started!

She pulls out yet another syringe full of saline which will soon be inside his left testicle!

Once both testicles are pumped full of saline they are very, very hard and the internal pressure is driving the slave mad! He begs for release, but Jassie takes her time and goes even slower ever time he asks for relief.

Don’t wait to long to get this clip, the fact is has so much red stuff in it may cause it to be removed very shortly!