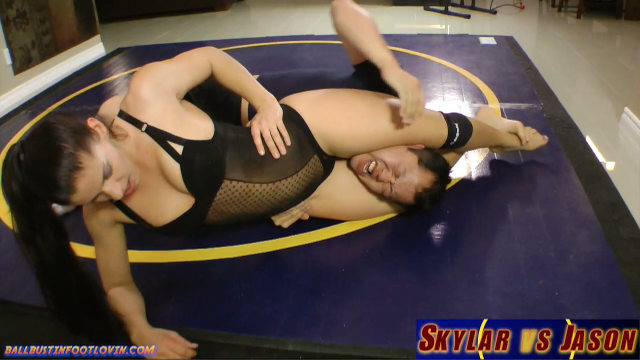 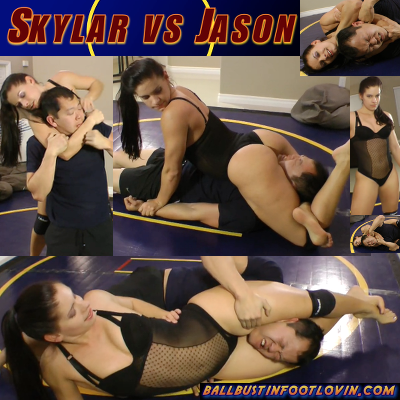 We have another male vs female 1 on 1 mixed wrestling match, featuring Skylar Rene against Jason.

“It’s Skylar Rene vs the fit and muscular Jason in this one, and it does not disappoint. People may wonder about Jason’s poor performance in this match for a guy in such good shape, but the truth is this match was proceeded by a 2vs1 mugging by Tyler and Skylar, in which Jason got totally squashed. So it’s a bit understandable that he gets crushed by the aggressive and cruel Skylar Rene in this one.

Some of you know how aggressive Skylar can be in her wrestling matches, and… well let’s just say she takes it to a whole new level in this one! Jason is scissored and choked into submission again and again, to the point where it becomes just another domination match. At points Jason attempts to aggressively rally and defend himself, but Skylar pours it on even more and he is left groaning face down in the mat. And if you note the sheer size of Skylar’s muscular legs compared to Jason’s overall body, you’ll understand why Skylar is able to hurt him so bad. Skylar has become even bigger and stronger in just a matter of months, and by the time she’s done with Jason, you’ll understand why this beautiful Posing Ballbuster is so dangerous!”