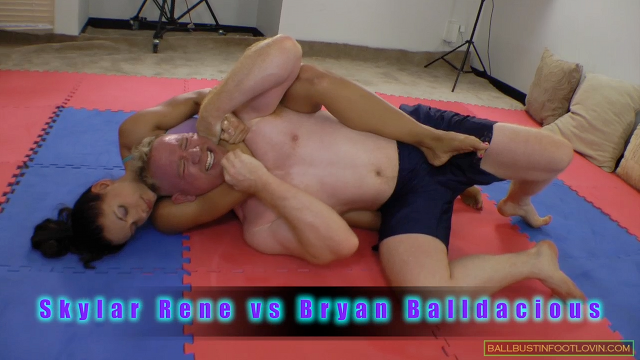 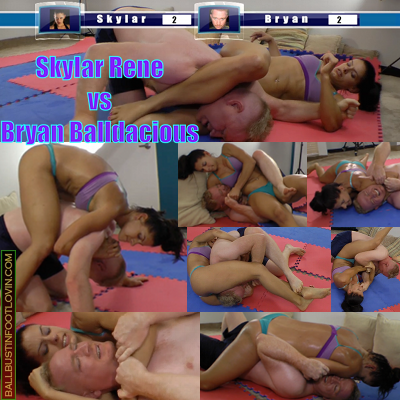 We have another male vs female competitive match, this time with Skylar Rene up against Bryan Balldacious. This was another custom request that we think you will find to be both competitive and suspenseful as the score is back and forth for the first half of this match as they are both struggling to win!

Towards the latter half of this match, Skylar suffers a minor injury, but sucks it up like a real trooper and continues to be more than a match for Bryan. At the end she is mad at the guy who requested this custom video and threatens to hunt him down and beat him up! Watch out boy she’ll chew you up!

Lot’s of sweating, struggling, and heavy breathing as the room is quite hot and these two are both struggling to win!

“The sizzling hot Skylar Rene takes on a very game Bryan Balldacious in this custom competitive wrestling match. Bryan had been obliterated earlier in a 2vs1 match against Jolene and Skylar, and to his credit, he’s out to get back some of his own in this match. And he does, as he fights through the pain of Skylar’s holds to score submissions.Yet Skylar has a vicious side that belies her good looks, and though new to mixed wrestling, she combines her nascent skills with an aggressive style that is hard to resist over the course of the match. Her soccer strengthened leg scissors, arm-bars and vicious chokes wear Bryan down and make him submit time after time, as she soon overcomes his initial advantages. If you thought Skylar was aggressive in her beatdown videos, then you need to see this one, because this time Bryan is fighting back to win, and even then, it still isn’t enough to hold off her brutal offense. Skylar usually beats Bryan up in beatdowns using her awesome leg and upper body strength, but this time she proves without a doubt how much pain he would be in if he did try to resist her power. A must see for Skylar Rene fans.”