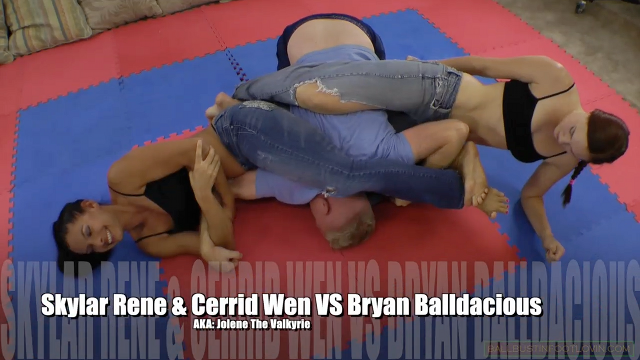 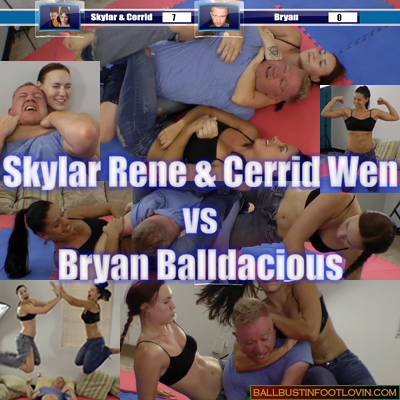 We have another 2vs1 competitive match, this time with Skylar Rene and Cerrid Wen (aka Jolene the Valkyrie) who team up against Bryan Balldacious. This was another custom request that we think you will find to be both competitive and very hot as these two powerful woman go after Bryan aiming to make him submit to their female powers and passion for teamwork to put a man down!

These girls even strike blooood… not once but twice! These two rabid females make Bryan bleeeed but they show no remorse!

“Bryan Balldacious takes on two of mixed wrestling most bodacious bombshells in this 2vs1 match. Seeking revenge against his total slaughter in his last series of matches against Cerrid, he takes on the slender yet powerful red head and her partner, Skylar Rene, the brutal, athletic soccer and Lingerie Football League beauty who has taken the mixed wresting world by storm since her debut in 2012. This is Skylar’s first true taped competitive mixed match, and she is eager to prove a point. Bryan had bragged about how his wrestling matches with the various girls over the past couple of weeks have given him more muscle strength and stamina than he had before, but it is quickly proven to not be enough against these two athletic beauties. Skylar and Cerrid, clad in tight jeans and sports bras to resemble female street fighters, rip into Bryan without any signs of remorse as he fights desperately from the get go to escape their combined locks. He has some success in defending himself at first, but it would take a real male grappler or MMA fighter to defeat these two, because these two are so much stronger than they appear and continuously grind down Bryan’s attempts at defense and offense ruthlessly. Both girls are relative newcomers to mixed wrestling, but they prove that one guy who doesn’t wrestle on a regular basis cannot hold his own against two fit females that know the basics of the grappling arts. Bryan is crushed in submission after submission, as Jolene’s ferocity and Skylar Rene’s raw soccer scissors take their toll on his body. If you guys wanted to see a video where Skylar Rene is doing more than just scissoring or ballbusting some wimp that won’t fight her back, check out this video! She, along with Cerrid, physically dominate Bryan throughout the whole video as Cerrid taunts his lack of male strength. A must see for competitive mixed wrestling fans!”