Raape Comes with a High Price 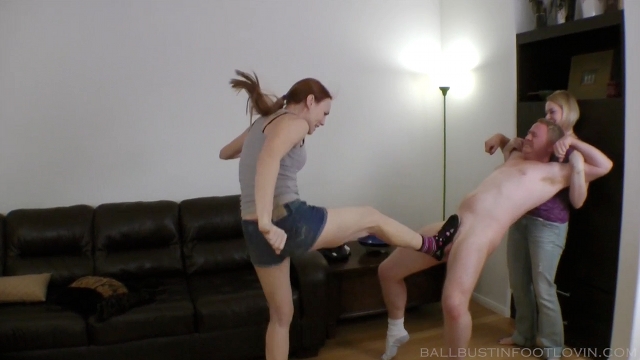 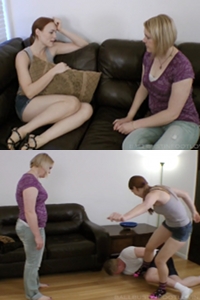 Sophia, a young innocent girl has just been raaped… she goes to her friends (Loren) house to seek comfort and advise. Sophia is so upset she can hardly tell Loren what happened to her. When she is finally able to get the words out and tell her friend what happened to her she is almost crying.

Loren is very concerned but also getting very mad as she wants revenge for what some raapist did to her friend.

Loren decides the best thing to do right now is to teach Sophia how to defend herself, so she gets 2 pair of socks and each girl puts them down their pants to simulate a guys balls, then they begin to kick each other in the groin, Loren explaining how to kick and where to kick for maximum pain and effect.

Loren’s boyfriend (Sean) comes over and asks what they are doing. Loren explains that Sophia was raaped and that she is now teaching Sophia how to defend herself from a male attacker. Loren asks Sean if he will help them out and stand in as their ball kicking dummy…. Sean agrees but only if they go easy on him.

The girls then kick Sean softly, however every now and then they actually land a hard kick and he goes down.

After standing in for awhile as their ball kicking dummy and taking several hard kicks, Sean gets mad and blows up at his girlfriend Loren. Sean begins to cuss at them and gets a bad attitude, so the girls kick him harder and Loren decides that this is the perfect example as now they have a mad man, like a rapist, so they kick and knee him until they are done with him and then kick him out of their house.

Sophia finally gets over some of her innocents and begins to refer to a boys private parts as “balls” she says it over and over again… balls, balls, balls…. Loren tells her she is happy that she is taking control of the language and calling them balls, which is a step in the direction of taking control of a man’s most vulnerable parts.

Then just as Sophia is starting to feel better Loren’s brother (Jack) comes down stairs mad that all the noise woke him up and he demands that they quite down as he is trying to sleep.

Sophia gets scarred as she recognizes Jack as the thug who raaped her. She tells Loren and Loren confronts her brother telling him he must pay.

Jack denies the accusations and and tried to get play it off and walk away. Sophia gets her phone and tells Jack she is calling the police. Jack pleads and asks if there is something he can do to figure this out. Sophia says she has a friend who works at the prison and she will make sure her gets fucked in the ass for what he d id the her.

Jack pleads and begs for some sort of way to work this out, tells the girls he will do anything to avoid going to prison. Loren speaks up and says… yeah, you can take all your clothes off and let us practice kicking you in the balls.

Sophia likes this idea, but does not want his nasty man parts to touch her skin, so she puts shoes on to avoid any direct contact and to make the kicks hurt more.

Sophia jumps on top of Jack and demands he open his legs to expose his balls to her kicking foot. Loren gets behind Jack to hold him as Sophia kicks and jump kicks Jacks balls. Jack falls down in agony and is no longer capable of resisting. Sophia wants Jack to pay the ultimate price for raaping her….. she wants to pop his balls.

Loren drags Jack into position so that they can both place one foot on each testicle… once in position, the girls bare down on Jack’s balls grinding his balls into the hard floor until his nuts crack and explode under the pressure of the stomping pissed off girls.

After they have took Jacks manhood away from him they high-five and say “looks like he wont be raaping anyone ever again!”