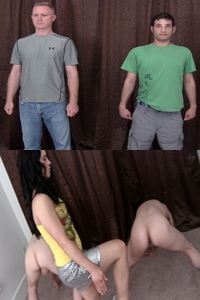 Bryan has just built a brilliant piece of technology (or so he believes), he is proud of it an wants to brag about his technical skills to his friend KidDynamite. The Kiddester is not impressed, in fact he is rather annoyed that Bryan has wasted credits on something that looks like a 20th Century Fracking piece of crap. The two get mad and begin to fight, however their violent behavior implants are activated which prevent them from fighting. The Violence Control Nexus sends out a Female Robot (Cheyenne Jewel) to Administer Testicle Punishment.

The two men are rendered immobile and robotic by their implants and sent to the Administrative Punishment room where they will receive testicle punishment (Ballbusting) by a sexy robot (Cheyenne Jewel). The robot orders the two men to get undressed, assume various punishment positions and leaves with a threat of castration should another episode of violence occur.