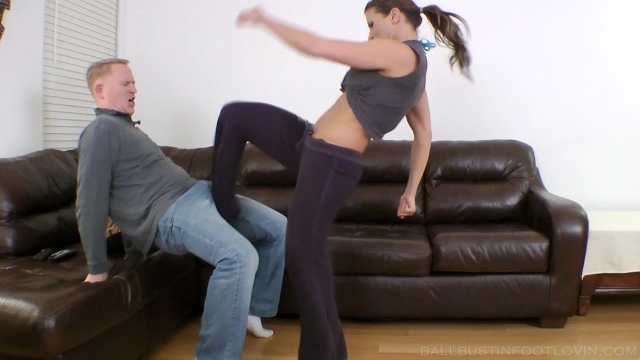 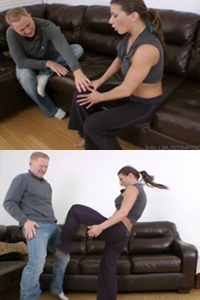 Ariel (freaked out and panicking) comes over to her friends house (Bryan) to seek his help. She comes in and sits down on his couch and while she is talking to him her right leg begins to twitch and kick uncontrollably. She explains that it’s a genetic disorder that only affects the female members of her family…. and that she had hoped it would skip over her, but it appears that she has inherited the disorder, a disorder called Restless Leg Syndrome.

Bryan (rather amused) asks if there is any kind of medical treatment to control the twitching and kicking. Ariel snaps back at him, NO! The only thing that seems to help is to kick a guy in the balls… she tells him. Bryan (looking skeptical) says really? Ariel explains that her mother discovered it and anytime her mother’s leg began to twitch she would kick her dad in his balls, and this would always calm her leg. Bryan replies, that must be why your dad has such a high pitch voice? Arial agrees and tells him that she was lucky her mom’s Restless Leg did not start until after she was born as her mom actually popped both of her dad’s balls.

Bryan finally agrees to help her out and she kicks his balls relentlessly, then her left leg starts to twitch and she has to kick him even more with her left leg.