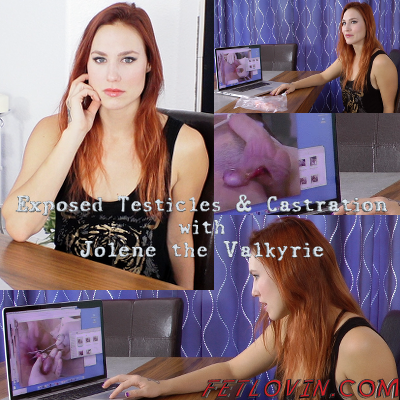 In case you’re not aware, Bryan is looking to have his right nut castrated (fact).

There is a discussion going on over at FetLife on this topic. I (Bryan) wanted to discuss this with Jolene to see if she was interested and if so get her thoughts, concerns, ideas and general feel for her enthusiasm of skewering exposed testicles and ultimately castrating a single testicle.

We discuss all of this on camera while looking at pictures of exposed testicles getting skewered and testicles being cut off (castrated).

In addition I just happened to have some real testicles on hand that Jolene squishes and plays with… I explain to her using these testicles where my right nut was damaged.

Personally I found this entire discussion with Jolene very arousing!

She’s full of sadistic smiles, giggles and eagerness at the thought of doing this to my right nut… she even threatens to take both of my balls when the time comes. ….and while that is not my plan, I can hardly think of another woman I would rather let completely castrate me!