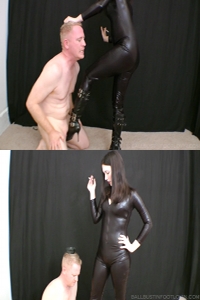 A disrespectful Slave shows up to Goddess’s house naked. She tells him to light her cigarette, but then takes the lighter and places it in his ass crack and laughs about it.

In addition the slave does not know how to address his goddess.

In the end goddess has her slave licking her boots clean for his disrespect.