An Interview with Scarlett Devine 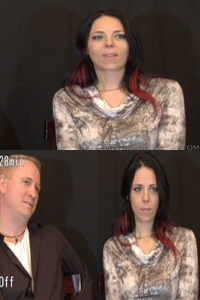 Scarlett Devine and Bryan Balldacious both sit down for a dual interview conducted by Tessa von Kix.

Scarlett talks about her background, how she got into the fetish scene, her thoughts on ballbusting and castration, she gives us her measurements and contact information.

We’re trying a different interview format here, one in which the ballbuster and ballbustee interact on a psychological and informational level prior to the actual female on male testicle kicking, and we feel this interview hits on a number of subtle but stimulating buttons and the interaction between all involved is very interesting in a psychological mind fuck sense…. you be the judge and let us know what you think.

In addition to the dialog, we noticed how tall Scarlett was and wanted Scarlett to stand up next to Bryan for height comparison and in her high heel boots she was taller than Bryan, coming in at about 6′ 2″ to Bryan’s 6′ 1″ in his boots. A very sexy Amazon woman!

Please note, we had some technical issues while shooting this scene which resulted in the camera menu being recorded and emblazoned upon the final footage. However it is of little distraction and does not spoil the interview.